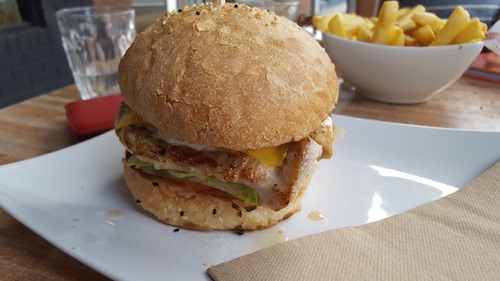 This week we visited House of Burgers in Berwick. With Mr Four in tow, we often have a difficult choice when visiting restaurants for dinner…to get him his own meal or just suffice with some of our own meal.  We decided to each get our own and get him a plain chicken skewer and a piece of bacon and we shared a bowl of chips.  Without even stipulating, the owner came over to us to clarify if the chicken skewer and bacon was for the little mister, which was spot on. They brought it out for him on a plate with a few bits of salad as well.  I ordered the Pollo (chicken) burger and husband ordered the chicken wrap. Not only did House of Burgers cater to children, with smaller portion sizes and cheaper meals, but they also provided books, puzzles and colouring in.  So while we waited we delved through the selection of entertainment options for Mister 4 on hand. Aside from the great service and overall diligent staff, the meals were amazing. Mr Four actually thought there was mashed potato in the chips they were so light and fluffy and I personally have not had a chicken burger that was so tender. The meal itself ended up being cheaper than what we would normally pay at Nando’s so that was a triple bonus for us. Love it, House of Burgers! Follow them on Facebook here Summary

Find awesome listings near you!